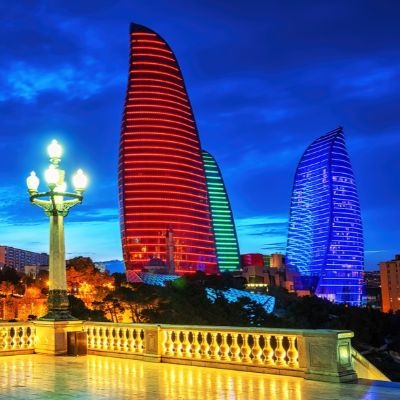 Baku City Tour
Enjoy a sightseeing tour of Baku’s most absorbing sights. We’ll visit to the city’s main monumental, historical and architectural attractions before climbing to the city’s highest point at Upland Park for an impressive panorama of the Azeri capital and its bay. From there we’ll descend to the old city, known locally as Icheri sheher. Today, just 1300 families call Icheri sheher, this city within a city, home. It’s a delightful place to take an evening stroll through the maze of streets to the gathering place of Fountains Square. There are also plenty of opportunities for shopping, should you wish. 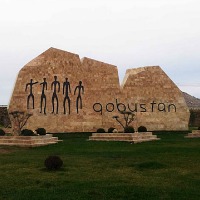 Day Tour to Gobustan National Park
Situated in East Azerbaijan, this archaeological reserve borders the southern slopes of the Major Caucasus ridge to the north, the Harami and Mishov Mountains to the south, Pirsaat River to the west and the Caspian Sea and Absheron peninsula to the east. Gobustan is a culturally significant landscape of myriad rock carvings. Over 6000 petroglyphs have been discovered here together; that’s not all - there are also many ancient caves and archaeological sites within the reserve. 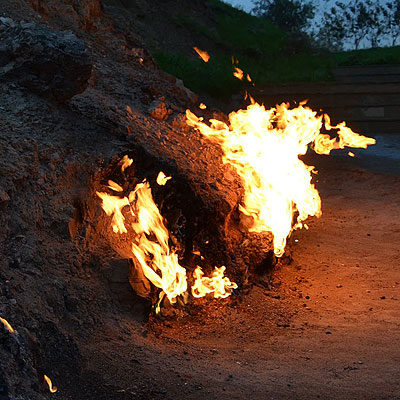 Visit to Yanar Dag
This intriguing natural phenomenon is called the Burning Rock, so named because it is fuelled by seepage of natural gas. Flames up to three metres high regularly shoot from the sandstone hillside. Many believe that Yanar Dag is the reason Azerbaijan acquired its nickname, the Land of Fire. 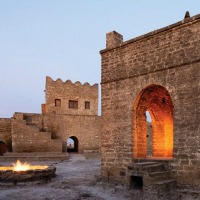 Guided Tour to Ateshgah
Ateshgah is the temple of fire worshippers located on the Apsheron peninsula on the outskirts of Surakhani village just thirty kilometres from the center of Baku. It was revered in different times by Zoroastrians, Hindus and Sikhs. The current temple building dates from the 17th century, but far more ancient artefacts have been excavated here. This pentagonal complex has an open courtyard with an altar in the centre which was a place of pilgrimage for worshippers. This open air museum has been recently restored and by the decree of the President of Azerbaijan, Ateshgah was declared a State historical-architectural reserve.