We offer a variety of tours to Georgia, perfectly suitable for all visitors and their requirements. Our unique tours to Georgia are available for different durations and costs as well as focusing on a diverse range of aspects of Georgian culture such as nature tours, historical tours and religious tours. Travellers can also purchase a combination package, which can include travel to Georgia,  Armenia and Azerbaijan.
Tour list 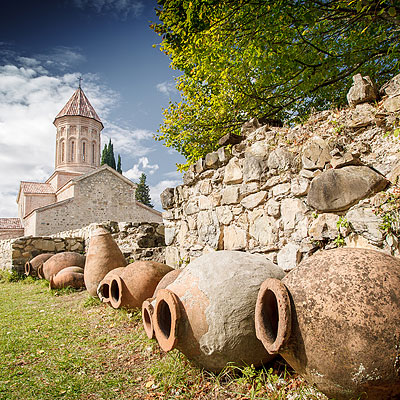 Highlights of Georgia - 8 days (GE-01)
On this eight day tour, you’ll get to know why Georgia wins a place in the hearts of those who visit. You’ll explore the charming capital Tbilisi, the religious centre of Mtskheta, cave cities of Vardzia and Uplistikhe. A visit to Rabati fortress completes this captivating introduction to one of the most welcoming countries in the Caucasus. 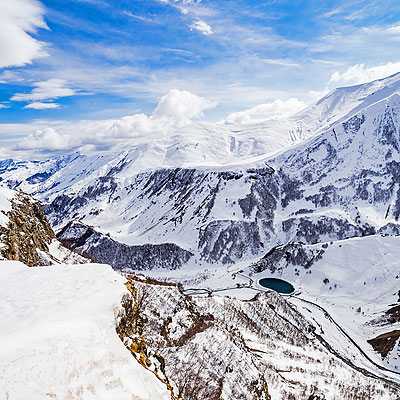 Best of Georgia - 10 days (GE-02)
This tour crams the highlights of the wonderful country of Georgia into a ten day package. From the ancient churches and historic museums of the capital Tbilisi to the wine growing region of Kakheti with plenty of fascinating stops in between. 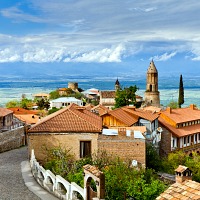 Great Georgian Discovery - 11 days (GE-03)
Over a period of eleven days, you’ll have time to get beneath the surface of this beautiful and welcoming country with this, our most comprehensive tour of Georgia. We will explore the most important UNESCO listed sights as well as stunning landscapes of the Kazbegi region. 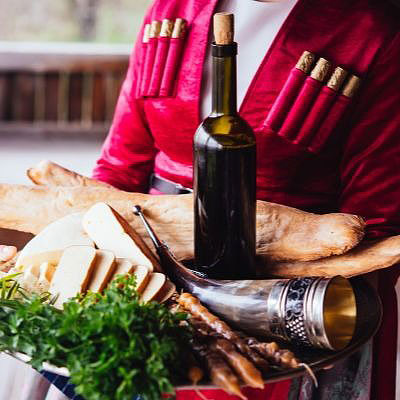 Georgia Wine Tour - 8 days (GE-04)
Georgia’s long association with wine production makes it a fascinating destination for wine connoisseurs. This tour visits some of the best vineyards in the country, where you’ll learn about the Georgian art of viticulture and taste some of its finest wines. Along the way, you’ll stop at some of the many historical and religious sites. 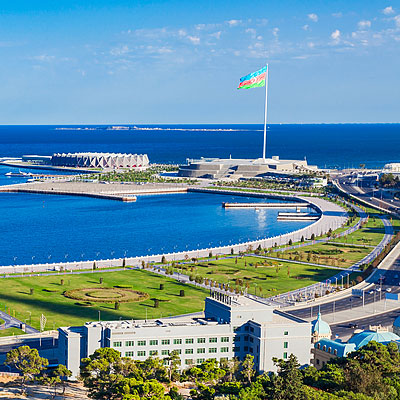 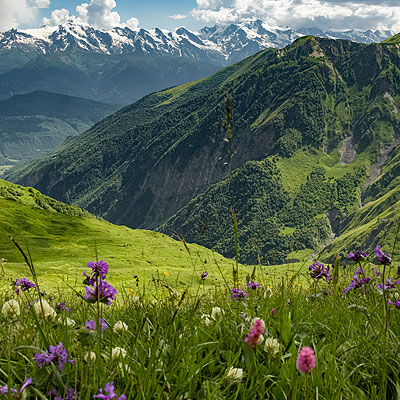 Best of Armenia and Georgia - 12 days (CT-05)
This 12 day tour combines the best of Armenia and Georgia, two very different but equally rewarding countries. In both, you’ll discover centuries-old monasteries in breathtaking locations, fascinating museums, characterful cities and of course a landscape that’s as beautiful as it is varied. Taste Armenian brandy, learn how to bake lavash, explore underground cave cities, luxuriate in a thermal bath and visit a chaotic animal bazaar. Throughout, you’ll receive a typically warm Caucasus welcome in a region where hospitality means so much more than just polite and efficient service. 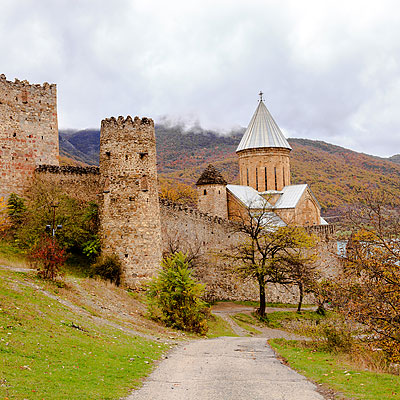 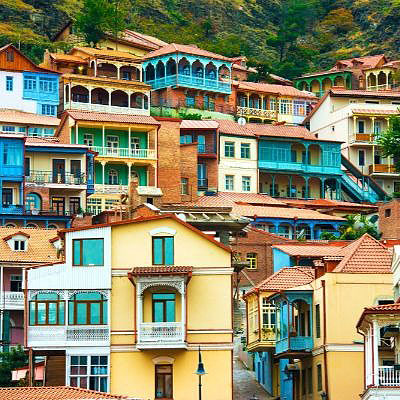 Highlights of Georgia - 6 days (GE-01)
This six-day tour offers the chance to get acquainted with the capital’s most important sights yet still provides the opportunity to explore a little of Georgia’s incredible scenery and enjoy guided tours of the country major landmarks as well as a wine-tasting and folklore show. 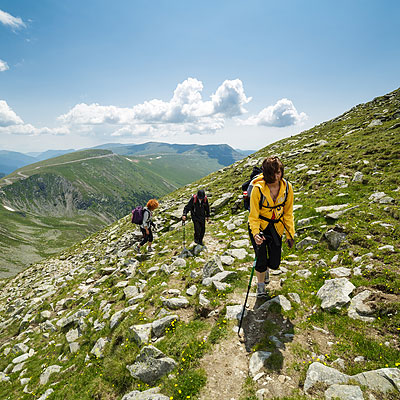 Trekking in Georgia - 8 days (GE-06)
This 8 day holiday to Georgia gives you the chance to discover this delightful corner of the Caucasus on foot. Enjoy breathtaking views of the mountains and explore centuries-old monasteries as you hike with a knowledgeable local guide. You’ll see the charming capital Tbilisi, as well as the spectacular gorges and valleys of the scenic Kazbegi region.

Known as the balcony of Europe, Georgia is located in Eurasia directly below Russia, on the southern slopes of the Caucasus mountains. Due to its location it has a rich culture influenced by both Byzantine and Persian influences. Also an Orthodox Christian country, it is abundant with ecclesiastical architecture with a rich history. The country has its own exotic architecture influenced by both surrounding continents, boasting a number of castles and other extraordinary structures influenced by the architecture of medieval Europe, Armenia and the Byzantine empire.

The people of Georgia are blessed with warm hearts and a kind nature that makes travelling to Georgia a fantastic way of truly experiencing an eclectic and welcoming culture.

Our tours of Georgia offer a myriad of options to enable you to fully experience what this beautiful country has to offer.

Tbilisi
The capital of this beautiful nation, Tbilisi is located at the heart of the Caucasus by the Mtkvari (Kura) River. Due to its geographical location, Tbilisi has been the target of many international empires and governments throughout history which greatly impacted the city’s culture. It has also been the ground of many historic battles and it is a treasure of Georgia.

As the capital, Tbilisi perfectly encapsulates the uniqueness of Georgia with superb tourist locations such as the Narikala Fortress, the Mitatsminda Amusement Park, The Bridge of Peace, Rustaveli Avenue and the Holy Trinity Cathedral of Tbilisi, making it a popular place to visit for holidays in Georgia. Tbilisi is also home to a number of historical bath houses due to its abundance of natural hot springs, which are incredibly popular amongst tourists and locals alike.

Kutaisi
The second largest and third most populated city in Georgia, Kutaisi is a beautiful city with its unique dense history. The capital of several historical Georgian kingdoms, Kutaisi is built around the Rioni River, with the city centre dating back to the 17th century.

Bagrati Cathedral, overlooking this historical city, and the Gelati Monastery are just a few of the many attractions of Kutaisi, as well as The David the Builder statue, one of the most significant Georgian Kings who ruled in the late 11th and 12th Century. When visiting Kutaisi, The Colchi Fountains are must see, with a wonderful display of lights at night, and the Prometheus Cave, an unmissable natural wonder with exquisite stalagmites and stalactites where legend says the Titan Prometheus was chained.

Vardzia
Our tours to Georgia can also take you driving 60 km into the wilderness from Akhaltsikhe, to the breathtaking cave city of Vardzia. During the 12th Century, Vardzia was booming town with a population of 50,000 people. Built on the side of an immense cliff, Vardzia is now a ghost town, consisting of houses formed from caves, with some as elaborate as to feature wine cellars, sewerage systems and even churches. Available both as a day trip or overnight, Vardzia is a magical place and an unmissable experience while travelling to Georgia.

Svaneti
Located in the beautiful mountainous region of the Caucasus, Svaneti is an ancient land of picturesque villages and snow-covered peaks rising 4000m above the flower-strewn alpine meadows. The breath-taking views of Svaneti make it the perfect backdrop for trekking and nature holidays in Georgia. The highest region in Georgia, Svaneti is historically named after the ethnic group which most commonly occupies the region, the Svans, and is home to the beautiful city of Mestia and UNESCO World Heritage Sites Chazhashi and Ushguli.

Our tours to Georgia

Here you will find our group tours to Georgia. You can use the filters to facilitate your search. If you cannot find any suitable itinerary, please contact us and we will tailor-make a trip to Georgia for you based on your preferences. Please also note, although all our groups are small, we can still arrange any of the tours listed below on a private basis.