This two week tour marries exotic Iran with the world’s oldest Christian nation, Armenia. A packed programme celebrates the rich cultural heritage of the two neighbours, featuring ancient mosques and palaces as well as monasteries precariously perched alongside river gorges and on hill tops. The tour will delight history fans and architecture buffs, interesting anyone with a desire to travel a little off the beaten track and reap the rewards of a warm welcome. 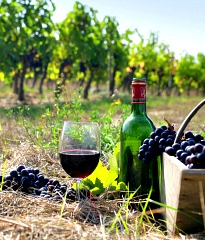 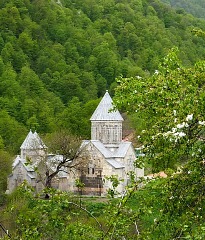 Dilijan
Little Switzerland as it’s dubbed is a pretty resort and spa town located in the Dilijan National Park. Surrounded by the forested hills and Alpine meadows of the Lesser Cauc... Read more 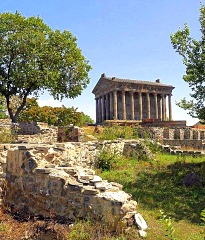 Garni
One of Armenia’s must-see sights, the archaeological site of Garni features the remains of the temple and Roman-style baths built in 76 AD on the foundation of stone walls co... Read more 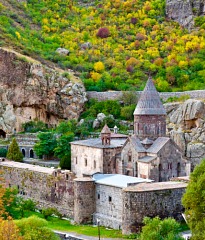 Geghard
North east of Garni, higher up the Azat Gorge, sits the Geghard Monastery. Its cathedral was constructed in 1215 though the monastery had been around for hundreds of years before t... Read more 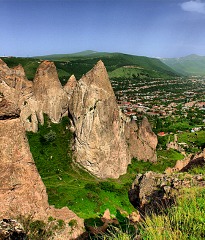 Goris
The attractive town of Goris is located in central Armenia and is famed for its thousands of rock-hewn dwellings. It has a number of important tourist attractions, among them the A... Read more 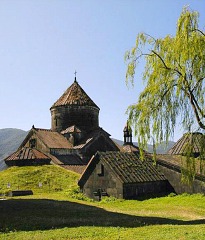 Haghpat
Along with nearby Sanahin Monastery, the Haghpat Monastery shares a place on UNESCO’s World Heritage list. This mediaeval monastery was founded by Queen Khosrovanuysh around ... Read more 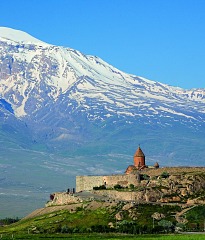 Khor Virap
Khor Virap has immense significance to Armenian history. It was there that Grigor Lusavorich, or St Gregory the Illuminator as he later became, was imprisoned. Whilst behind bars, ... Read more 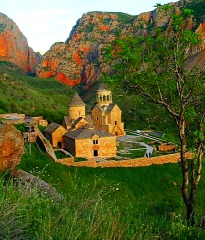 Noravank
With its backdrop of the terracotta cliffs of the Amaghu River gorge, this monastery must have one of the most picturesque settings in all of Armenia. The monastery features the tw... Read more 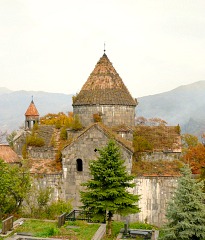 Sanahin
Connected to Alaverdi by a cable car said to have the steepest ascent of any in the former USSR, Sanahin village houses a 10th century monastery complex which is UNESCO-listed. The... Read more 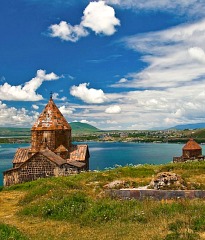 Sevan
Lake Sevan is a popular summer beach resort. Visitors flock to its shores to enjoy the country’s only beaches and to take to the water for swimming, jet skiing, windsurfing a... Read more 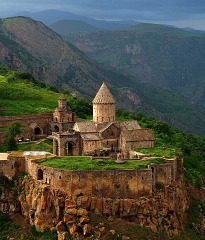 Tatev
The monastery at Tatev is reached by the “Wings of Tatev” cable car, opened in 2010 and the world’s longest non-stop double track cable car. This 9th century Arme... Read more 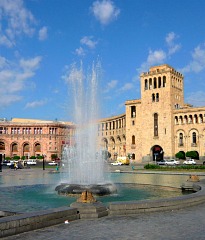 Yerevan - the Capital of Armenia
Nicknamed the “pink city” on account of the widespread use of rose-coloured tuff rock in its architecture, the Armenian capital was founded way back in 782 BC. Modern Y... Read more
View detailed day-by-day itinerary of this tour
Included in the Tour Price


Half-board meals
Half-board (breakfast and dinner) each day. Service begins with dinner on the day of arrival and ends with breakfast on the day of departure. Please advise us if you have any special dietary requirements. You will be able to get quick lunch at your expense during excursions stopping at local cafes or restaurants.

Want to travel on different dates?
Please see below for our group tour dates, if you would like to travel on a different day, please let us know and we will come back to you with an offer. There might be additional surcharges for a private tour but all depends on the number of people in your party and your travel preferences.

DESCRIPTION
Opened in 2012, Tufenkian Historic Yerevan Hotel is the most recent of the Tufenkian Heritage hotels to open in Armenia. Conveniently located at the junction of Hanrapetutyan and Buzand Streets, the hotel is situated near Republic Square right at the heart of the action. This elegant boutique hotel sets style at the centre of its agenda yet doesn’t forget the importance of backing up aesthetics with good service.

The 85 rooms are equipped with designer fittings, satellite TV, minibar and furnishings chosen with comfort in mind.  It offers free WiFi and a seasonal outdoor pool. The hotel’s Kharpert Restaurant specialises in Armenian and Italian dishes; there’s also a bar lounge and a conference centre.

DESCRIPTION
Since opening in January 2013, the Cascade Hotel in Yerevan has been pleasing customers with its quality of accommodation and family atmosphere. Located an easy stroll from the Cascade Complex and also the Cafesjian Centre of Arts, many of the Armenian capital’s attractions are just a stone’s throw from the hotel.

The 25 well-equipped rooms at the Cascade Hotel are classically furnished and are en-suite.  They feature air conditioning, flat screen TV, phone and in room refrigerator. In addition there is free WiFi across the hotel.

The hotel’s restaurant serves both Armenian and international cuisine and there’s also a lounge bar where you’ll be able to sip a cocktail or relax with a glass of wine. In addition a range of services are provided including free parking to the front of the hotel, 24 hour currency exchange and an ATM.

DESCRIPTION
Mina Hotel in Goris provides everything you expect from a decent three star hotel. Its 24 hour reception means there’s always someone on hand should you need them, and there is also laundry service, porters available and room service. Luggage storage can be arranged for the day of check out. There is a parking area and also conference facilities.

Mina Hotel offers 22 comfortably furnished rooms in a modern style. Each room has its own bathroom as well as hairdryer, satellite TV and cable internet connection. WiFi is available in the hotel lobby.

DESCRIPTION
Located on a hillside in the northern part of Goris, one of this charming hotel’s main selling points is its ability to provide a fabulous view. Inside, a cosy feel is achieved by incorporating locally produced textiles, rugs and furniture to create a tasteful home away from home.

The Mirhav Hotel has 31 rooms, each with en suite bathroom, satellite TV, hair dryer and telephone from which guests are permitted free local calls. WiFi is free also.  Laundry and ironing service can be provided on request and at an additional cost. The hotel’s restaurant serves tasty dishes each evening as well as a simple breakfast to start the day.

Rooms are cosy and simply furnished, yet clean and comfortable.  Furnished to a modern style, the 12 rooms also have a private bathroom, satellite TV, refrigerator and air conditioning.

DESCRIPTION
Built in 2004, the Avan Dzoraget hotel exudes an air of history despite its young age. Its designers aimed to evoke the romance associated with a mediaeval castle and it’s fair to say they pulled it off. With a basalt stone exterior and spacious interiors characterised by lofty ceilings and clever design, this building positively oozes Armenian culture from every nook and cranny. From the sculpture of Taurus in the hotel courtyard to the ancient Armenian script adorning the lobby walls, this building is a treat for the eyes. A carefully chosen setting overlooking the Debed River further adds to its charm, as does the exceptional Armenian and Georgian cuisine serves in its restaurant.

If you can bear to drag yourself away from the public areas, the 34 rooms and suites are lavishly decorated using high quality materials such as walnut and wrought iron. Wood floors strewn with Tufenkian carpets, shower stalls with glass enclosures and Armenian handicrafts add to the sumptuous effect. 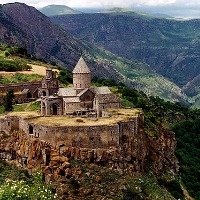 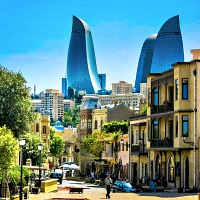 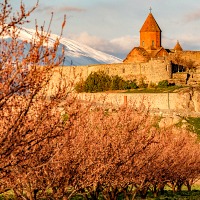 Great Armenian Discovery - 10 days (AM-03)
This ten day tour will provide the opportunity to have an in-depth visit to the country’s most fascinating and culturally important sights. At a leisurely pace, you’ll explore the major landmarks of Armenia and also visit a local family to learn about the way of life in these parts.